So Who Is Coming To Legends Day

Its here at last – today at the Sky Blues League One fixture against Oxford United CCFPA and CCFC are celebrating our 13th annual the club’s Former Players, Legends Day 2019.

We have signed up a ‘Fantastic 45 (plus)’ CCFC ‘Stars of the Past’ covering the club’s playing prowess over well over sixty years, from the fifties (e.g. Peter Wyer, Ron Farmer & Ken Brown ) to the noughties (e.g. Gary McSheffrey & Stuart Giddings ).

Gary in the Sky Blue

Keith Houchen in the Sky Blue

Nick Pick in the Sky Blue

John Tudor in the Sky Blue

They have come from far and wide and all points of the UK. Sixties star John Tudor has jetted in From the United States and there is a good sprinkling of Scottish Sky Blues including Roy Barry, Willie Carr, Ian Wallace and Quintin Young.

Steve in the Sky Blue

Noel in the Sky Blue

There are some fantastic ‘first timers’ too like Noel Whelan, Darren Huckerby, Steve Froggatt and David Speedie. Former ‘Cov Kid’ player and ‘gaffer’ Bobby Gould will be our ‘extra special’ matchday guest for the day also visiting the club’s youngest fans in the Family Zone before the game, touring the Ricoh supporters’ lounges and joining the BBC CWR live matchday commentary team from the Ricoh Press Box. Bobby’s brother (another former Sky Blue) Trevor Gould will also be there! The full list is provided below:-

All the usual fun and games of previous Legends Days will on tap for Sky Blues fans including the pitch parade of Legends at half time (below), the Legends ‘around the Ricoh lounges’ and a mass sing-song and banter with CCFPAs Billy Bell in Lady Gs after the game.

Just to whet your appetite here is a video of some of the pitch highlights from last year (which, of course was also a tribute day for our late, great member Cyrille Regis). 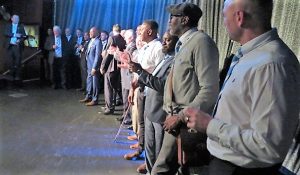 This is an important match for the Sky Blues as they are within touching distance of the League One playoffs and are playing thir last Saturday home game of the season (and perhaps forever) at the Ricoh so there is bound to be a good crowd anyway. So get down to the Arena and join your voices to Sky Blues fans everywhere and our ‘Fantastic Forty Five’ FPs at Legends Day 2019 and give a ‘Ricoh Roar’ to encourage Mark Robins‘ Men to another win! See You There!!

Here is who we expect to attend:-

(*Micky & Oggy will be likely round and about doing their usual matchday duties. Peake and Andrew Whing will be coming after half-time after his Saturday duties with the Fox’s Academy have been completed)