The Coventry City Former Players Association are delighted to announce that Peter Bodak will be the Association’s ‘special guest’ at Saturday’s must-win Sky Blues’ clash clash with Fleetwood Town (21st January 2017). The ‘Cod Army’ are currently riding high at 6th in League One so the Sky Blues languishing uncomfortably at the bottom of the table desperately need to get a league win under their belts!

Fans will rember that Peter started with the Sky Blues as a schoolboy in 1977 and a year after becoming a professional with us he made his debut for the City in 1980. A precocious and confident young wing forward Peter scored 7 goals in 44 first team appearances including BBC’s ‘Goal of the Season’ in our F.A.Cup victory at Manchester City in January 1982. 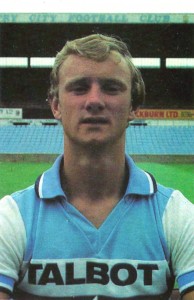 Peter in the Sky Blue

A move to Manchester United in close season 1982 didn’t really work out and Peter became a bit of a wanderer appearing in the U.K. for Manchester City (loan),  Walsall, Crewe Alexandra, and Swansea City surrounding spells abroad with Seiko and Happy Valley (Hong Kong), Royal Antwerp (Belgium) and in the U.S.A.  Peter finished his career in non-league football with the likes of Sutton Coldfield FC and Atherstone Town in the early 1990s. He will be sure to be looking out for other CCFC players of the same era who are Ricoh frequent visitors like Peter Hormantschuk and Andy Blair.

Peter signs for CCFPA in 2011. Bob Eales does the honours

Look out for Peter before the game below the stands in the Ricoh visiting th club’s youngest fans in the Family Zone run by CCFPA Associate member Pat Raybould and her enthusaistic team of volunteers (usually accompanied by Sky Blue Sam and a current squad member). Also Peter will be touring the supporters lounges and boxes prior to kick-off, participating in a Q&A with a former Sky Blue playing colleague, club host and fellow CCFPA member Brian ‘Harry’ Roberts.

After the game CCFPA’s Billy Bell will invite Peter down to the stage of Lady Gs in the G-Casino at the Ricoh for some entertaining ‘craic’ in front of the Sky Blues supporters who gather there and hopefully they will be able to discuss the finer points of a badly needed Sky Blues home win. For those who can’t make the game Peter will also assist the BBC CWR commentary team in providing live analysis as the game unfolds.