Jones Gets The London Vote

Jodi Jones has been named as the Coventry City London Supporters Club Player Of The Month for September.

Congratulations this month to Jodi Jones, who received nearly twice as many votes over second place Michael Doyle, to extended his lead in the CCLSC Player of the Season. Lee Burge also picked up over 100 votes and enters the top 6, shown below.

Perhaps 2017/18 will change the recent trend, where the previous seasons winner is no longer with the club at the start of the new season. Last seasons winning Gael Bigiriana joins Romain Vincelot, Jim O'Brien, Joe Murphy, Carl Baker and Richard Keogh who have all left the Club in recent years, shortly after winning the London Supporters Award. 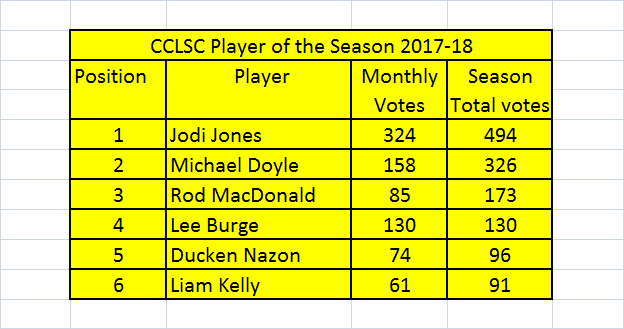