Coventry City Former Players Association and the Sky Blues will be hosting the Association’s 10th Anniversary Legends Day 2017 at the Ricoh under a week after well over 40,000 members of the Sky Blue Army cheered on Mark Robins’ youthful team to EFL Trophy victory over Oxford United at Wembley last Sunday.

CCFC will be displaying the Checkatrade Cup on the pitch in front of more than forty of our Sky Blues legends and all our wonderful fans at the Peterborough United game this Saturday April 8th.  Who can forget last year with the late Jimmy Hill‘s family and Brian ‘Killer’ Kilclinestimulating the memory buds.

A goodly number of the Sky Blues stars of the past were with us at Wembley 2017 and a select few will have also been there with the victorious 1987 F.A.Cup squad (whose 30th Anniversary year we also celebrate). From that famous team with us on Saturday will be CCFPA member John Sillett (joint manager/coach), CCFPA Committee member Dave Bennett as well as our members Micky Gynn, Cyrille Regis and, of course, Steve Ogrizovic who will be performing his usual duties from the Sky Blues dugout as the game unfolds.

We will also be celebrating at the ‘Posh’ game the 50th Anniversary of JH’s 1966-67 squad who won promotion to Div.One and several members of that squad will be there to help including Dietmar Bruck, Ron Farmer, Bill Glazier, Bobby Gould, Mick Kearns, Dudley Roberts and John Tudor! Bill is flying in from Spain to be with us and John has flown in all the way from Minnesota USA!!

Popular former club captain Roy Barry will be performing our ‘special guest duties’ on top of those expected from all his colleagues and will be riding the BBC CWR airwaves providing matchday analysis for them as the game unfolds.   He will be hoping for a repeat of last year’s Legends Day 6-0 thumping of Bury!

As far as we know (though last minute changes can occur) the full list of FPs who we are currently expecting on Saturday are:- 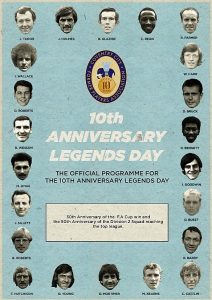 The ‘legends’ start arriving around 11.45 prior to entertaining them for a pre-match lunch at which we hope a large number of Sky blue diners will be joining them in the E.ON lounge.  All the usual fun and games will be on tap for Sky Blues fans wherever they are in the Ricoh – the pitch parade of Legends before the game, certain Legends touring ‘around the Ricoh lounges’ and a mass sing-song and banter with CCFPA’s Billy Bell and the FPs from the stage of Lady G’s after the game. As usual we have produced a special LD17 programme for the day in addition to loads of pages as part of CCFC’s programme PUSB and there could be more surprises too!

The club have reduced general admission prices so no excuse to meet the club’s ‘stars of the past’ at Legends Day 2017!