Have you kept any pre 1945 Coventry City programmes? If you have and it fills a gap in our growing collection we would like to take an image via scan or photocopy.  Do you have any that look like the images below?

Association Chairman Jim Brown and Secretary Mike Young continue to build up a digital archive of Coventry City’s oldest programmes. The aim is to make for the first time as complete as possible permanent record of the Club’s pre 1945 programmes in digital images to eventually provide a publicly available resource about the players events and stats of the early years of the club for the education and entertainment of players, fans and researchers alike. We are collecting both home and away programmes (including reserve issues).

We now have over 650 different image sets from the early years of the 20th century to the end of the Second World War. We have already been greatly assisted in our project by quite a number of Sky Blues fans and collectors. Fans of other clubs may also be able to help too! We are grateful to hear about single programmes or a collection. For example, a while back, Coventrian Cliff Jones was clearing out boxes in his attic prior to a house move and rediscovered a treasure trove of veteran issues – the front of four of them are reproduced above – all away games, all very different!  Three are from Season 1937-38 Division Two games at Chesterfield, Southampton and Sheffield United. The fourth is a Wartime game in the Football League North at Filbert Street. Leicester in 1942-43. Thanks to Cliff!

Just today we have received copies of three Football Combination programmes from the mid 1930s including City’s Division Three South promotion season of 1935-36! These, however, are home matches against the second strings (of Luton Town 1933-34, Q.P.R 1934-35 and Charlton 1935-36) from the London Combination in which the City’s Reserve team played (finishing mid-table in all three seasons). They are worth preserving especially as they are full-size 14 page programmes with covers exactly the same as the one below (extreme right). These four samples cover 1929-36

To jog your memories further we reproduce immediately below covers from the first six seasons of the ‘Bantams’ entry into the Football League (1919-25). 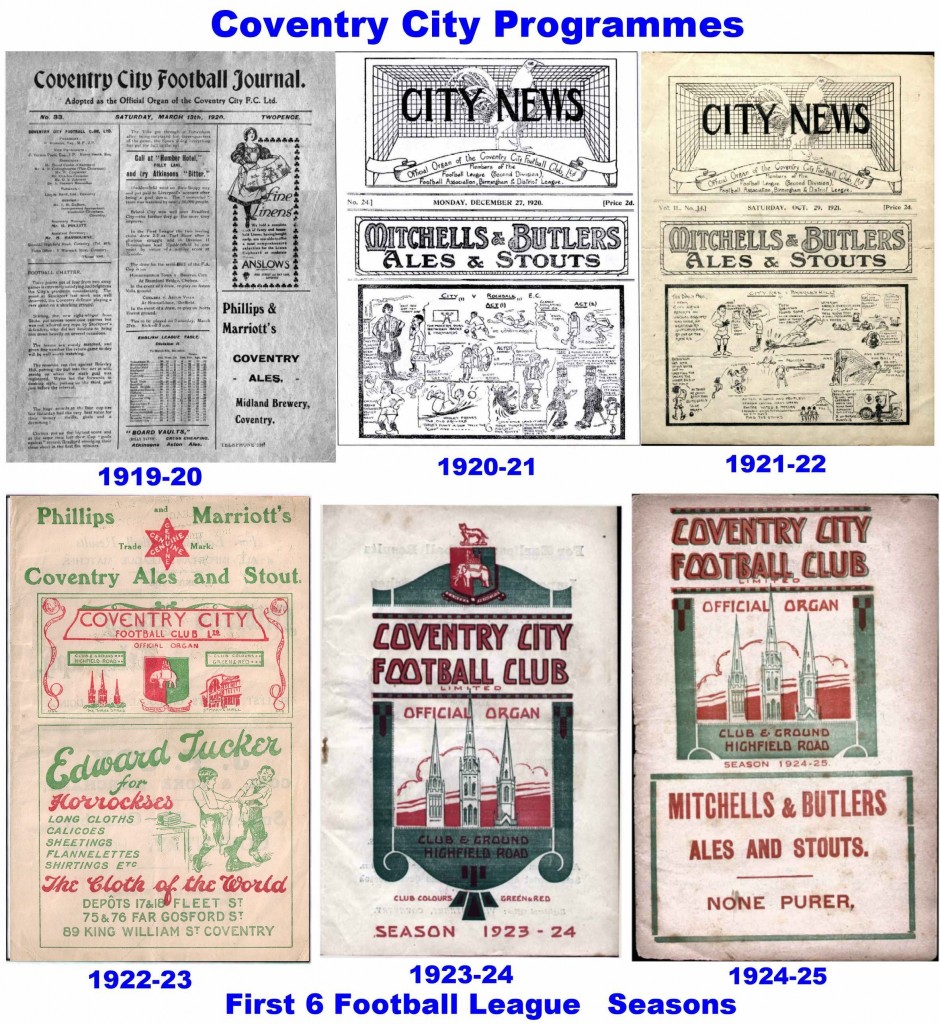 and below are some from the Club’s earlier Birmingham League and Southern League years before the First World War.

There are still lots of gaps which you may be able to help fill so if you have any prewar programme – home or away – of City games, the earlier the better, we would be grateful if you could let Mike Young by email at  m.young9@ntlworld.com, what you have got so he can check whether it fills a hole in our database. If it is then he will make arrangements with you to get it scanned or photocopied as appropriate.

Though we have asked before we still hope that some of our FPA members and associate members will be able to protect a bit more of the club’s important heritage for posterity and in doing so help make the Club’s (and your) history come alive again!