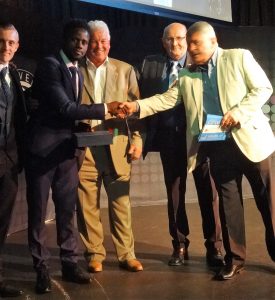 Bigi is presented with his award by Dietmar 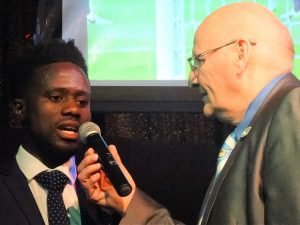 Coventry City midfielder Gael Bigirimana received the last of his end of season’s awards in the G-Casino under the Ricoh stadium, following the Sky Blues’ last game of the season, a 1-0 defeat of Walsall. Gael was presented with the Coventry City Former Players Association Player of the Season 2016-17 trophy in the Lady G’s Showbar by Jim Brown and Kirk Stephens, respectively CCFPA Chairman and President. CCFPA’s Billy Bell was master of ceremonies. 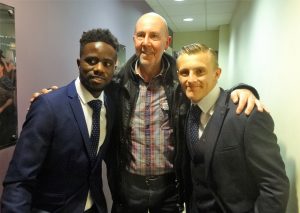 Gael, who has hit a particularly good streak of form in the back end of this season, including the first Wembley goal in the club’s Checkatrade Trophy win at Wembley, also put in a great contribution to Saturday’s victory also winning the Man of the Match award. George Thomas, the match winning scorer in both games accompanied ‘Bigi’ down to the G-Casino as he had also picked up a few other end of season awards and was, indeed, 2nd in the CCFPA voting (by G-Casino patrons in the post match sessions with CCFPA’s ‘special guests’ in Lady Gs throughout the season plus CCFPA committee members). Saturday’s ‘special guest’, club Legend Dietmar Bruck was also present to congratulate both players and complete the presentation, as was fellow Sky Blue former player and committee member Dave Bennett.

It was particularly gratifying to see Gael pick up the award as he is also an Association member, signed up by then membership secretary Mike Young on a visit back to the Ricoh after moving to Newcastle United in 2012! Gael returned in 2015 and although his second period with the Sky Blues has had some ups and downs he is now clearly a force for the future as CCFC face season 2017-18 in League Two. It has been a momentous period for Gael, a man of deep faith, given his Wembley goal and win and the birth of his first child very recently.

Congratulations on all fronts Gael!!