Today is the last day to get Coventry City 2017/2018 season tickets at the early bird prices.

Early Bird Season Tickets are priced at £299 for adults in standard zone and £345 in the premium zone. 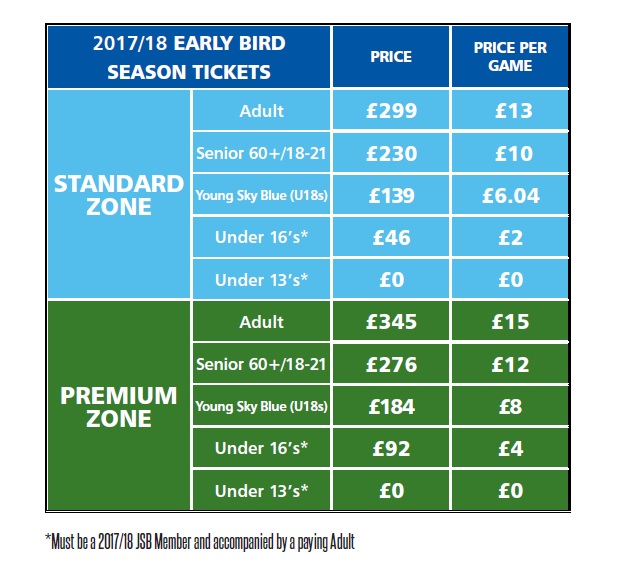 GENERAL 2017/18 SEASON TICKET INFORMATION
• Fans can use their existing Season Ticket card if they are purchasing the same seat. If you are moving seats, you will be issued with a new Season Ticket card.
• Existing Season Ticket holders will be able to purchase quickly and easily via the eticketing website using their current supporter number.
• Age bands for concession Season Tickets are calculated based on the supporters’ age as of 31st August 2017. Please note it is the supporters’ responsibility to ensure that the club has the correct date of birth on file. Terms & conditions apply.
• During the early bird period, there will be no service charge for Season Tickets. Following the conclusion of the early bird period, a £6 service charge will be applied for any Season Ticket purchase.
• The early bird period will last until midnight on Wednesday 31st May before the regular pricing structure is introduced.
• Supporters can purchase their 2017/18 Season Ticket(s) through 10 instalments using the Zebra Finance option.