The Coventry City goal drought ended in spectacular fashion at Kenilworth Road last Saturday when the Sky Blues beat league leaders Luton Town 3-0 with goals from McNulty, Shipley and Nazon. It was the biggest away league win since the 5-0 victory at Crewe in January 2016 and McNulty's 16th minute goal was the first league goal since Nazon's 9th minute effort against Crewe on 30th September – a total of 457 minutes playing time.

It was the worst run without a league goal since 2003 when Gary McAllister's team failed to score in their last five games of the 2002-03 season and the first game of 2003-04. That spell lasted 617 minutes and was slightly shorter than the longest post-war run set in 1973 when Gordon Milne's team went six complete games (645 minutes) without scoring between 6th October and 24th November. For a side that included Tommy Hutchison, Brian Alderson, Colin Stein and David Cross that took some doing. During that seven week period the team did however manage eleven goals in four League Cup ties.
The worst run ever was back in 1919-20, City's inaugural season in the Football League. After scoring in a 2-1 defeat to Leicester on 4th October the team failed to score in 11 successive games until they scored three against Stoke City on Christmas Day – a total of 1048 minutes without a goal. This stood as the longest ever League run until 1992-93 when Hartlepool went 1227 minutes (13 games) without scoring.
At Luton there was the rare occurrence of two City substitutes scoring in the same game in the shape of Jordan Shipley and Duckens Nazon. It had only occurred once before in a league game, in 2010 when Carl Baker and Jordan Clarke came off the bench to clinch a 3-1 home victory over Barnsley. It has happened twice in Cup games – in an FA Cup win at Norwich in 2000 when Cedric Roussel and John Eustace scored, and last season at Wycombe in the Checkatrade Trophy Ryan Haynes and Gael Bigirimana scored after coming on at half-time in the 4-2 win.
Colin Heys always poses interesting questions and recently asked about the shirts that City wore for a game at West Ham in the 1970s. He remembers them turning out in white shirts with red shorts but cannot remember the season. It was 1st April 1978 and was not an April Fool. City's 'change' kit that season was a red version of the Admiral, tram-line kit, and apparently the referee at Upton Park that day decided that City's red kit clashed with the Hammers claret and blue. City's kit man was despatched to a local sports shop to purchase some shirts and came back with plain white Admiral shirts which were worn with the red 'change' shorts. The kit didn't do the Sky Blues a lot of good – relegation-threatened Hammers won 2-1, denting City's European qualification hopes. It wasn't the only strange kit worn by City at Upton Park. In the 1981 League Cup semi-final second leg the team wore yellow shirts with a blue trim on a round neck collar and yellow shorts. The normal away kit was the infamous chocolate brown but was unpopular under floodlights so the change was made. 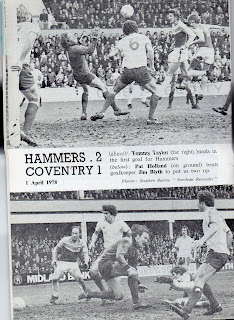 Colin also wanted to know how many clubs City have played in league games since they joined the league in 1919. That's a tricky question by virtue of the new clubs with old names e.g. Newport County. The stats experts www.enfa.co.uk consider the modern-day Newport and Accrington clubs different to the previous clubs of the same name and also consider, rightly or wrongly, Wimbledon and MK Dons to be the same club. So, on that basis the league newcomers Forest Green Rovers became the 116th team two weeks ago.
The most recent firsts have been:
105. Scunthorpe 2007
106. Yeovil 2012
107. Stevenage 2012
108. Crawley 2012
109. Fleetwood 2014
110. Burton Albion 2015
111. AFC Wimbledon 2016
112. Newport County (2) 2017
113. Cambridge United 2017
114. Barnet 2017
115. Accrington Stanley (2) 2017
116. Forest Green 2017
By Christmas that number will have reached 119 after successive games against Morecambe, Cheltenham Town and Wycombe Wanderers who will all be playing the Sky Blues for the first time in a league game. It will also mean that the Sky Blues have played all of the current 92 league clubs at least once. I believe only two other clubs, Notts County and Swindon, will have achieved this feat by the end of this season.