The Coventry City Former Players Association has great pleasure in announcing that our member and former prolific Sky Blue striker Garry Thompson will be our ‘special guest’ at next Saturday’s home game at the Ricoh (25th November 2017) when the Sky Blues take on Crawley.

He will be hoping to see the Sky Blues return to home form after their hard-fought win at Lincoln City last Saturday! Garry, who was born in Birmingham visits us from time to time when he attends Sky Blues games and Association functions. On Saturday he will also be joining several other members of the 1980-81 CCFC squad for a book signing*

Garry joined City as an apprentice in 1976 and soon debuted in a defeat against the Villa in March 1978. Over six seasons with the Sky Blues, Garry made over 150 appearances scoring 49 goals – an excellent strike rate for the top division. He also gained England U21 recognition. 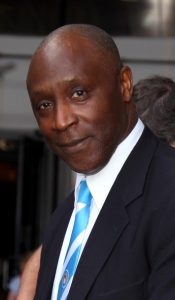 Garry at a past Legends Day

In February 1983 he was transferred to West Bromwich Albion where he continued his impressive strike rate (45 goals in 105 appearances).  His forward prowess continued to be in demand as his long career of over 20 years saw spells at Q.P.R. as well as at Sheffield Wednesday, Aston Villa, Watford, Crystal Palace, Cardiff and Northampton and not far off 500 league appearances (124 league goals) in total.

Garry hung up his boots in 1997 and had management or coaching roles at, amongst others, Northampton Town, Bristol Rovers and Brentford as well as Farnborough Town and Hucknall Town. He has more recently been working as a football scout and businessman.

As usual with our ‘special guests’ we will hope to entice Garry down to the Family Zone to visit the next generation of Sky Blues fans before the game and he is sure to be ‘around the lounges’ around then also being interviewed by our member, former Sky Blue defender Brian ‘Harry’ Roberts, another member of the ‘Boys of ’81’.  He will also be assisting the BBC CWR matchday commentary team as the game unfolds and will offer fans the benefit of his experience and views on the game with a light hearted Q&A with CCFPA vice chairman Billy Bell after the game in Lady G’s at the Ricoh Arena’s G-Casino.*