The special event will surround the Sky Blues match against Peterborough United on Saturday, 8th April 2017 and we hope to make this one extra special!

At our last Legends Day in February 2016 (above), a large number of our former players joined fans in remembering the Sky Blues iconic former manager and managing director, the late Jimmy Hill the day after a memorial service for him in Coventry Cathedral. On the day there was much to celebrate in his memory on the pitch as the Sky Blues put on a great performance to demolish Bury by six clear goals. This season all will be hoping the Sky Blues can punish the Posh in front of the assembled Sky Blues heroes. As well as members of JH’s family nearly 40 former players joined us last season including, memorably, a rare visitor, Brian Kilcline and many other Sky Blue Legends including the likes of  Dave Bennett, Ron Farmer, Ian Wallace and Bobby Gould. 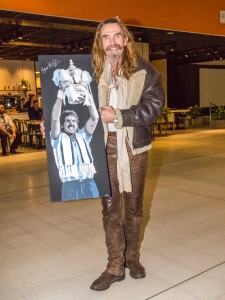 The Association will be working hard to equal or surpass last year’s event in terms of numbers of stars-of-the-past attending and we are expecting some big new names! We are also celebrating the 50th anniversary of reaching the top tier with our 1966-67 Division 2 Championship Squad as well as the 30th anniversary of our F.A.Cup triumph in 1986-87. Members of both squads are sure to be present.

All the usual fun and games will be present including the traditional half-time parade and ‘team-photo’ in the centre circle, and a Sky Blue sing song with mass ranks of FPs and fans in Lady Gs at the Arena after the game! Legends Day always guarantees a hospitality sell-out as many of the Club’s supporters are keen to wine and dine with their favourite City stars from yesteryear in the E.ON Lounge in the pre match meal. Due to popular demand in previous years, the club and CCFPA have decided to put the event on sale early so you can book your places now!

The Club is offering a Legends Day package which allows purchasers to spend the afternoon with our former players and further includes :
• 3 Course dining in the glass-fronted E.ON Lounge overlooking the pitch
• Padded seat in the corporate seating area
• Complimentary matchday programmes and team sheets
• Half-time tea and coffee
• Man of the Match interview and presentation
• VIP car parking (one space per 4 places booked)
The package costs £69 +VAT per person. (Season Ticket holders can upgrade at a discounted cost of £59 +VAT). Tickets for Children Under-12  are £34.50+VAT.
For further details or to book for your places alongside the Legends against Peterborough on 8th Aprol next, please call 02476 99 1987 (option 2) , book online here, or email hospitality@ccfc.co.uk.