Any hopes that our recent three-game winning run pointed towards a charge towards the play-offs were dashed in last week’s 2-1 reverse against Scunthorpe United. The pattern for this season seems set, we tend to win when we take the lead, we tend to lose when we fall behind, we go on winning streaks, we go on losing streaks. It makes little sense to get too carried away when we win, but neither does it warrant an existential crisis when we lose. 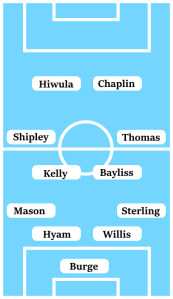 As predictable as last week’s loss at Scunthorpe was, it would be silly to deviate much from what was so recently a winning formula. In particular, the front pairing of Conor Chaplin and Jordy Hiwula seems to set the tone nicely for positive and energetic football, bringing in Jonson Clarke-Harris after an admittedly good showing from the bench last week is probably the greatest risk to the balance of the team.

The biggest fitness concern this week surrounds Liam Kelly – who reportedly sustained all manner of injuries and illnesses to keep him out last week – can return to the side. Michael Doyle’s rusty showing last week highlighted just how much more dynamic Liam Kelly presence in midfield makes us. If Kelly is out, this may be at last be the opportunity for one of our most vaunted summer signings, Abu Ogogo, to make a belated impact on the side.

The addition of the maverick Wolves loanee Bright Enobakhare this week boosts our attacking options. Jordan Shipley’s place in the side would appear most at risk as a result of this new signing, despite Enobakhare having played most of his football in a wide right position. While there are murmurs about his lack of application or end product, Enobakhare could be the injection of further attacking pace and creativity required to move our threat level up a notch. It seems likeliest that any impact Enobakhare will make on this game will be from the bench.

Our last meeting with AFC Wimbledon – back in August – was the nillest of 0-0 draws. A Sky Blues side still adjusting to a raft of new signings trudged around disjointedly against a toothless AFC Wimbledon. Neither goalkeeper was particularly troubled over the course of the 90 minutes, with only Junior Brown’s late kamikaze tackle in the penalty area that was somehow waved on by the referee threatening to break the deadlock.