A solid away win at Wycombe Wanderers makes it three in a row for the Sky Blues. Despite now sitting 8th in the table, the prospect of mounting a bid for the play-offs still seems a distant one. While there have been small changes and improvements, it hasn’t really been enough to expect a sustained upturn in results over final months of the campaign. It would take a lot more than winning a fourth game in a row in this upcoming trip to Scunthorpe to change that feeling. 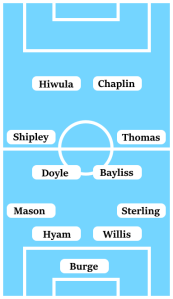 With Luke Thomas having had his loan deal extended to the end of the season, it takes one thing off Mark Robins to do list in the January transfer window. Ideally, the addition of another wide player to the squad would give us a better balance – whether in the starting line-up or from the bench – but sorting out Thomas’ loan extension so early means there should be relatively little disruption to the XI for the immediate future.

The big concern heading into this game surrounds the injury sustained by Liam Kelly against Wycombe. The midfielder has quietly been a key element of these past three wins in both the way he breaks up the play and his progressive use of the ball. Having to deploy either Michael Doyle or Abu Ogogo in his stead appears an uncomfortable drop-off, although Mark Robins has suggested that he’s considering playing the much lighter-weight Zain Westbrooke in Kelly’s place.

The form at the minute should keep any other changes, if any, to an absolute minimum. In particular, the balance in attack of Jordy Hiwula starting games to press opponents high up the pitch and then Jonson Clarke-Harris coming off the bench to bully tired defenders is working quite nicely. The back four is settling into a useful and dynamic unit, while Lee Burge was playing with such confidence in goal that he could successfully pull off a Cruyff turn in our last game. Long may it last.

We really should have capped a decent opening day performance against Scunthorpe United with victory. Decent first-half opportunities for Jordy Hiwula and Maxime Biamou were spurned before Tony Andreu scored an excellent free-kick early in the second-half to hint at the importance he was seemingly to have for the team this season. However, the late introductions of key players for Scunthorpe in playmaker Duane Holmes, subsequently sold to Derby County, and the ball-player Funso Ojo quickly turned the game on its head, leading to two late goals.